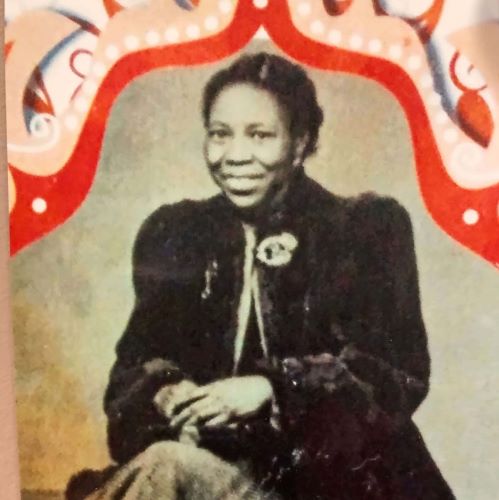 When Wilhelmina (Talbert) Benson joined the Saint Francis LIFE program in September 2018, her goal was to stay independent and remain living in her own home. Now celebrating her 102nd birthday, she is still living at home with the help of the LIFE program and partnership with her caregiver and grandson, Rev. Anthony Coleman. Wilhelmina and Rev. Coleman recently shared with LIFE her amazing story, with memories that include life as a direct descendant of slaves and as a dancer at the Harlem Cotton Club in the 1920’s.

The story begins when Wilhelmina’s grandmother, Rosalee, affectionately called Mama Rose, was captured in Africa, brought to America and enslaved on a plantation in Edgefield, SC. Rosalee gave birth to Wilhelmina’s father Hillery, whom everyone knew as Hill. Hill grew up on the plantation and was later mated with Wilhelmina’s mother, Carrie Key, an enslaved indigenous woman of the Cherokee Nation, for the purpose of breeding offspring to work in the fields. The family surname, Talbert, came from the name of the plantation owner, as was typical during that time.

When Hill and Carrie were given their freedom, the family settled on a plantation owned by Talbert’s brother in Vidalia, GA. Hill managed the plantation’s 100-acre sharecropping farm, where he raised sugar cane, corn, cotton, fruit trees and vegetables. Wilhelmina was born and named “Willie-Joe” in 1917. The youngest of her parents’ 12 surviving children, she says she still remembers picking cotton on the farm.

During the Great Migration, Hill and his family were among six million African Americans who moved north from the rural South. The family landed in Claymont, DE, where Hill worked for Worth Steel Corporation and helped found historic Hickman Row, a set of brick rowhouses built around 1919 to house the company’s African American workforce. Despite racial violence, including hooded men terrorizing the residents with fire bombs and racial slurs, families held steadfast.  Wilhelmina recalls her father helping workers and their families gain housing there, establishing Hickman Row as a close-knit black community known for supporting families seeking a new life and friendships in a foreign place.

Wilhelmina attended Hickman Row’s one-room school, State Line School, which she says was the first black school in Delaware. She was taught by the late Pauline Dyson, a pioneer in education and a bridge between the black and white communities, who championed student integration. In fact, it was Dyson who encouraged Wilhelmina to change her name from Willie-Joe to the more feminine Wilhelmina before entering high school; Willie-Joe has been Wilhelmina ever since. She went on to graduate from Howard High School, and is the school’s oldest living graduate and the only living member of her high school graduating class.

“When I was raised, children were seen and not heard,” says Wilhelmina. However, her parents composed and wrote original songs and did allow her sisters and her to sing in the church choir. “He was living the way the Bible says to live,” Wilhelmina fondly says of her father. “And he taught his family.” That teaching stayed with her; she’s a 65-year member of the Congregation of Jehovah’s Witnesses.

Wilhelmina met her husband, the late Francis “Bobby” Benson, while he was visiting Wilmington. She and her mother were fishing and ran out of worms when Francis volunteered to help. “He even helped put the worm on my hook,” she laughs. “He walked me home, and I offered him chocolate milk. He told me he’d be back. And he was.” They were married for 62 years.

During the late 1920’s and early 1930’s, Wilhelmina and her husband lived in New York, where they were well-known dancers at Harlem’s famous Cotton Club, a whites-only establishment that featured many of the most popular black entertainers of the era. “They had all the big bands there,” she reminisces, telling stories of the couple dancing for musicians Duke Ellington, Louis Armstrong and Count Basie, and vocalists Cab Calloway, Billie Holliday and Lena Horne. Six-foot Francis easily lifted the petite Wilhelmina in the Jitterbug and Lindy Hop, and they won many awards. A close friend of Ella Fitzgerald, Wilhelmina even gave Fitzgerald her stockings so she could try out for the club chorus line.

Eventually Francis, Wilhelmina and her son, Hillery, named for her father, returned to Hickman Row for several years before settling in Wilmington, where she lives now.  “It’s awesome to be here living in this age,” says Wilhelmina. “I’m so happy to be alive in this generation.”

Wilhelmina credits her grandson, Rev. Coleman, with taking good care of her. “He spoils me,” she says with a laugh. “He does all the cooking, but I taught him!”

“My grandmother gave me a connection to my family history, and it’s helped me to understand more about who I am,” recounts Rev. Coleman, also known as Rev. Meiam, Pastor and Founder of ATC Ministries – The Church of I Am.

Iesha White, Wilhelmina’s social worker at the Saint Francis LIFE Program, agrees. “To listen to her life experiences gives us a better perspective on our own lives,”

Saint Francis LIFE is a Program of All-inclusive Care for the Elderly that helps seniors stay independent and live at home with medical and social supports and services. Call 302-660-3351 for more information.