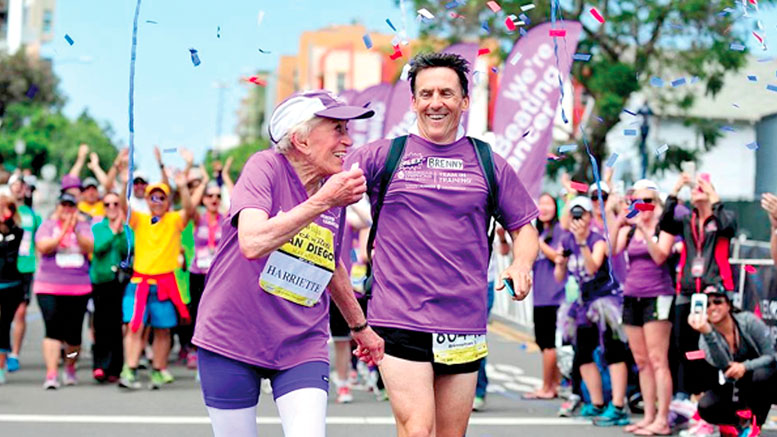 Harriette Thompson has told her 10 grandchildren plenty of stories over the years. But on May 31, the 92-year-old Charlotte, NC resident did something so remarkable that her grandkids will someday be telling their grandkids about it.

For 7 hours, 24 minutes and 36 seconds, Thompson hurried—as quickly as she could—along Southern California streets and highways, eventually crossing the finish line of the San Diego Rock ’n’ Roll Marathon to become the oldest woman ever to complete a 26.2- mile race.

Dressed in a purple Team In Training T-shirt and ball cap, purple shoes and purple shorts over white tights (concealing bandages that covered wounds from radiation treatment for squamous cell carcinoma), Thompson was welcomed at the finish line outside the San Diego Padres’ Petco Park by confetti cannons and a throng of reporters.

“I can’t believe I made it!” Thompson said a few hours later. “I was really tired at one point. Around Mile 21, I was going up a hill and it was like a mountain,” she said, laughing, “and I was thinking, ‘This is sort of crazy at my age.’ But then I felt better coming down the hill.”

Nearly 19,000 people were entered in the 18th running of the Rock ’n’ Roll event. Thompson has completed the race 16 out of those 18 years, each time on behalf of the Leukemia & Lymphoma Society and Team In Training. Her fundraising efforts have generated more than $100,000.

Thompson says she is loyal to the San Diego race—the only marathon she has ever done—because of its dedication to the Leukemia & Lymphoma Society. The three-time cancer survivor has watched both parents and three brothers die of cancer; her husband of 67 years, Sydnor, died in January at age 90, also after a long battle with the disease.

Besides 1998, the inaugural year, the only time Thompson has missed the race was in 2013, because she’d recently had all but one of her upper teeth removed as a result of an oral cancer that also took her upper jawbone. In 2010, 2011 and 2012, she raced while the disease was eating away at her mouth.

Thompson had been a legendary figure within Team In Training locally for years, but in 2014 became a cult-hero of sorts among national media. This year, race organizers flew her to San Diego first class, chauffeured her around the city and created a special poster featuring an illustration of Thompson running along the ocean with her name and the quote “Anyone Can Do It!” as part of its “Why Running Rocks” campaign.

Previously, the oldest female marathon finisher on record was Gladys Burrill, who ran the 2010 Honolulu Marathon in 9:53:16 at the age of 92 years, 19 days old. Thompson turned 92 three months ago. Thompson did fall shy of another world record: Her time of 7:07:42 at last year’s race remains the fastest marathon finish ever by a 90- to 94-yearold woman.

Asked about whether she’ll try again next year, she said “it’s possible.” “(The) Leukemia & Lymphoma (Society), that’s the main reason I do run,” Thompson said. “But then I was thinking, I probably wouldn’t be here if I didn’t do this run every year, because it keeps me active all year. So I’m sort of being paid back for my efforts. People wonder how I can do it at my age, and that may be it.”