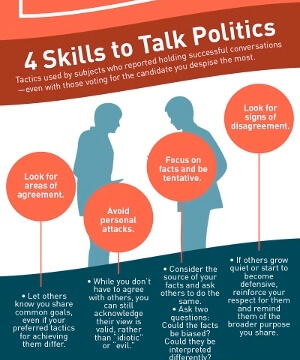 You can’t turn on your TV or listen to the radio without tuning into the drama that is the 2016 U.S. presidential race. As the primary elections come to a close, the media is buzzing about unprecedented contested elections, unexpected slug fests over party nominations, and the standard deluge of he-said, she-said banter.

But the latest research at VitalSmarts confirms the drama isn’t confined to popular media. Our homes, workplaces, communities, and social media feeds are buzzing with political banter—and it isn’t pretty.

The essence of democracy is a contest of ideas. Our society depends on respectful discussion to solve our most pressing concerns and issues. If we can’t talk about politics amicably, we can’t make better decisions about our future. It’s time we learned to set aside our weapons of mass discussion and learn to dialogue respectfully about our nation’s most pressing concerns.

And thankfully not all is lost. While people generally expressed very negative views of their opponents, we probed to find formulas from those who successfully discussed politics with someone who held a dramatically different opinion. When asked what they did that worked, respondents most often used words like: agree, listen, common, open, respect, think, and ask.

The silver lining in our data is that people do have it in them to listen and agree. Even those who think their rivals are angry, uneducated, and ignorant can also reach agreement, respect and find common ground. The bottom line is that you don’t have to agree with someone to respect them.

After analyzing tactics used by the respectful few, we distilled the findings into five tips for talking politics with others—even those voting for the candidate you despise the most.

1.  Start with the desire to learn, not win.

We often end up in debate because we start with a debate mentality. We want to talk politics so we can win people over to our way of thinking. Instead of discussing the pros and cons of an issue or candidate, we offer up dozens of examples of why others should believe what we believe. People don’t want to be won over and we’re rarely good enough actors to hide our motive.

The best place to start a conversation is to ask people for their view on the issue or candidate in question. Then, ask them why they’ve come to that conclusion. Earn the right to share your views by allowing others to share theirs. Enter the conversation with the sincere desire to learn about others; otherwise you’ll just end up haranguing them with your view and fail miserably.

2.  View others as rational, not wrong.

It’s interesting to watch politicians talk with one another. Perhaps the fact that they’re on TV or the radio is distorting their normal tactics, but whatever the reason, they’re looking more and more like Jerry Springer guests than political pundits. They don’t just disagree with the other person; they’re disgusted that the other person could hold such an insane view. The insulting language follows. The sneers, the rolling eyes, the looks of dismay all add up to one message—you’re an idiot.

The truth is, any topic that has divided the nation or your community isn’t divided along the lines of “me and all right-thinking people” and “all of those idiots out there who disagree with us.” Like it or not, the other people are reasonable, rational, and generally decent. They hold a different view largely because they hold different information. Find a way to get the information out on the table and it’s likely people will resolve their differences.

Now, this reasonable approach isn’t nearly as fun as thinking that others are morons. It doesn’t condone our actions to attack them or make fun of them or be disgusted by them. It forces us to talk to them. And as a result, it is far more effective. If you enter a conversation with the view that others are reasonable, rational, and decent, the next step follows naturally.

For some people, listening is the price you pay to earn the right to talk. They don’t ever really listen. They pause while the other person talks. During this awkward nonverbal stage of the interaction, they kill time by thinking up new arguments. They mentally discount the other person. They can hardly wait to talk because they now have new things to disagree with and disprove.

This, of course, is not listening. Listening, in contrast, consists of the sincere act of trying to understand the other person’s point of view. It starts with attending to the words they say and the concepts they share. It continues as you try to make sense of their comments rather than discredit them. And to truly listen, you should be looking for the truth in what the other person says—trying to find a common understanding. This, of course, runs against years of college training where you strain to hear the fault in others’ thinking so you can then level criticism against them—but it lies at the very heart of communication and should be an integral part of every political conversation. Listening doesn’t require you to change your mind, only to be willing to doing so. There’s a difference.

This really runs counter to what you see on TV. People don’t run political campaigns where they make modest claims. Every candidate can run faster, jump higher, and think better than everyone else. Political campaigns are filled with absolutes, superlatives, and hyperbole. Healthy conversations aren’t.

For over three decades, we’ve studied thousands of people who have been singled out by their peers as the most influential people they know. Whether they work for a bank or a coal mine, they’re a parent or a senior executive, they’re an elected official or a voter, effective people share one skill in common—they all know how to express their opinion in a way that doesn’t cause others to become defensive. They all know how to hold a crucial conversation. They are persuasive, not abrasive. They are (and this is counter intuitive) less forceful than most others. This doesn’t mean that they’re less confident, only that they replace absolutes with tentative language. They swap “everyone knows” for, “here’s what I’m wondering.” Rather than saying “That’s wrong!” they utter, “Have you thought of it this way?”

Great strength accompanies a willingness to open your views to counter opinions. It also communicates confidence and helps people repress their natural tendency to fight new ideas. Ultimately, it leads to healthy dialogue.

As you state your views, openly invite others to share their contrasting opinions. Be sincere in your quest to hear new ideas. Make it safe for others. If necessary, even play devil’s advocate—help people realize it’s okay to explore both sides of the issue.

Create a climate where making a point is nothing more than that. Expressing an idea doesn’t mean you’ve tattooed it to your thigh. You’re not married to your point of view. It’s an idea and ideas should be examined from all sides. Now, this doesn’t mean you can’t hold an opinion, just that you’re willing to share what you currently think and then hear what others have to say, particularly if it’s different.

Follow these five tips and you’ll be able to turn political issues into genuine conversations that won’t end in hurt feelings and lost friendships.

Kerry Patterson is a four-time New York Times bestselling author and cofounder of VitalSmarts. For thirty-five years, Kerry co-designed the company’s line of award-winning training programs. His work has been translated into twenty-eight languages, is available in thirty-six countries, and has generated results for 300 of the Fortune 500.

To receive more tips and skills like these from Kerry on how to improve your communication and increase your personal influence, subscribe to his award-winning Crucial Skills Newsletter. Each week, the authors share advice on how to navigate tricky, high-stakes situations at work and at home. Find more at www.crucialskills.com. All rights reserved. Reprinted with permission.